What is functional limb weakness?

Patients with functional weakness experience symptoms of limb weakness which can be disabling and frightening such as problems walking or a ‘heaviness’ down one side, dropping things or a feeling that a limb just doesn’t feel normal or ‘part of them’.

To the patient and the doctor it often looks as if you have had a stroke or have symptoms of multiple sclerosis. However, unlike these conditions, with functional limb weakness, there is no permanent damage to the nervous system which means that it can improve or even go away completely.

How is a diagnosis of functional limb weakness made?

The diagnosis of functional weakness is usually made by a neurologist or stroke physician.

When they are examined, the doctor usually finds a pattern of weakness typical of this problem and does not find changes in reflexes or other evidence of a structural neurological disease (like stroke).

This is because in functional weakness all the parts of the nervous system are there, they are just not working properly so that when you try to move your arm or leg it doesn’t do it as well as it should.

Your doctor may be able to find specific physical signs of functional weakness when you are examined and make the diagnosis in the same way as you would with a condition like migraine (which also does not have a ‘test’).

If you were a computer, it’s a bit like having a software problem rather than a hardware problem

Positive signs of functional weakness include the following, although none are 100% reliable and should not be used on their own:

• Collapsing weakness – this is a tendency for an arm or leg to ‘collapse’ when being tested. This may be interpreted by a doctor as ‘not trying’. In fact, patients with functional weakness typically find that the limb gets weaker the more they try

• Hoover’s sign – in this test, your affected leg may be weak when you try to push your foot down into the bed. However, when the doctor asks you to push up with your other leg the strength in your affected leg returns. Some patients with functional weakness use this sign as a form of physiotherapy to encourage normal movement in their affected leg (and to help demonstrate to themselves that the diagnosis is correct)

The video of Hoover’s sign shows that Lucy has weakness of her right leg. When she tries to keep it flat on the floor she can’t.

But when I ask her to lift up her normal left leg and focus on keeping that in the air then the weakness of the right leg temporarily goes away.

The explanation for this is that when Lucy is trying hard to move the right leg it doesn’t do what it’s told, there is a problem in the function of the brain and nervous system getting in the way. But when she is focusing on the left leg, automatic movements return showing that the weakness is not due to damage.

You might need to watch the clip a few times to get your head round it!

• Hip Abductor sign – This sign is positive when someone tries to push out with their hip, but is not able to do that as well as they can with the other side (hip abductor weakness). However, when they push out with their good side, strength is much better in the side that was originally weak. Have a look at the video below of Rachel who had functional limb weakness as part of FND

Patients with functional leg weakness sometimes drag their leg behind them as shown in these two pictures.

•A dragging kind of walk – Patients with functional leg weakness sometimes have a very characteristic way of walking which means that their affected leg “drags” along the ground. This is different to someone with a stroke or multiple sclerosis who swings their leg if they are able to stand up.

•A difference between the examination of power on the bed and when walking – some people with functional weakness have relatively normal examination of strength in the legs on the bed but weak legs when walking. The reverse can also be true. This is not because they are not trying to walk, the variability is a key feature of the diagnosis.

Normal scans and tests help to make the diagnosis, but the diagnosis is usually made at the bedside on the basis of these positive signs by a neurologist when they first meet you

How does functional limb weakness happen?

Functional limb weakness is a complex problem. It arises for different reasons in different people. Often the symptoms are accompanied by feelings of frustration, worry and low mood but these are not the cause of the problem.

We recognise a number of different situations in which functional weakness can arise. Your symptom may fall in to one of these categories although none of them may be relevant to you:

2. An illness with a lot of fatigue or bed rest— weakness can develop slowly in people who are suffering from a lot of fatigue or exhaustion. In some patients too much rest can bring the symptoms on. There may be an overlap in this situation with Chronic Fatigue Syndrome. Click on the link to find out more.

3. Waking up from an anaesthetic after an operation or arising from sleep —this is not due to damage from the anaesthetic but may be something to do with the temporarily altered brain state when coming round. Similar things sometimes occur when you wake up normally.

4. After an episode of dissociation / panic attack– If your weakness came on suddenly it may have been associated with some other symptoms like lightheadedness and dissociation (a feeling that things around you were distant or disconnected). Dissociation is a bit like a trance and is described more in this website. Sometimes these episodes are very frightening, especially if they come ‘out of the blue’ and can lead to a panic attack. Once the panic attack is over it can leave behind the feeling that one half of the body is ‘not right’, perhaps heavy or tingly.

Sometimes symptoms come on after a functional/dissociative seizure (click here)

6. Triggered by a migraine. In some types of migraine there is an “aura” which means people get numbness, tingling or weakness down one side of their body. Especially if you have never had this before this can be frightening and trigger FND 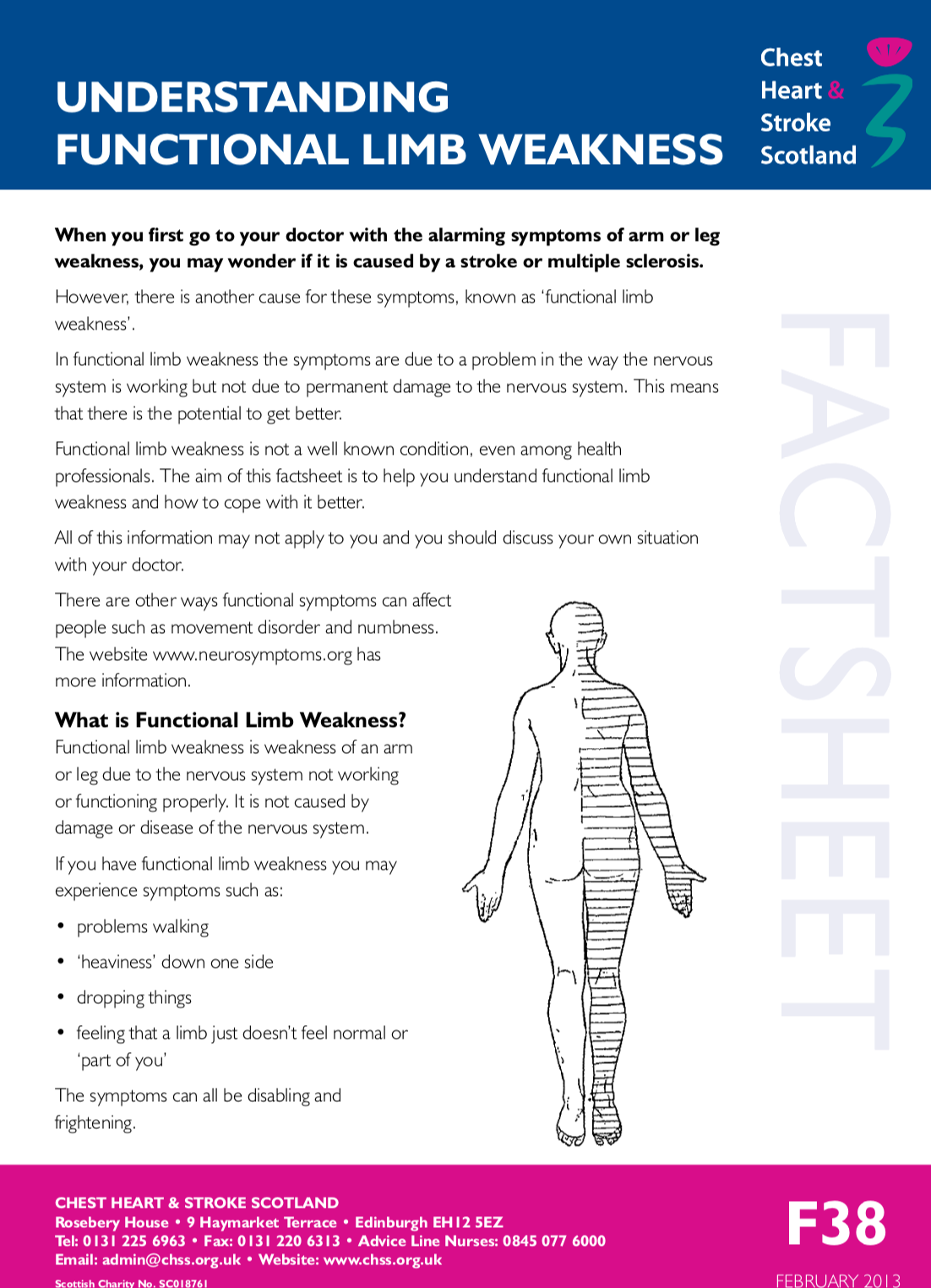