These are one of the commonest FND symptoms.

Dissociative attacks are disabling and frightening attacks that look very similar to epilepsy or faints. People can experience shaking attacks or attacks when they simply ’blackout’ often for quite a long time

Unlike epilepsy, functional seizures are not due to abnormal electrical activity in the brain or another neurological disease. They are however due to a temporary problem in the way the nervous system is working, a bit like a trance like state. They are potentially treatable, although not with tablets but instead learning techniques to get control of them and working out why they may have happened in the first place.

Whereas epileptic seizures are caused by a sudden, abnormal electrical discharge in the brain, dissociative seizures happen through a process in the brain known as dissociation.

Functional Seizures are common. Nearly half of all people brought in to hospital with suspected epilepsy have them. There are probably around 50,000 people in the UK at any one time with functional seizures and 250,000 in the USA.

Many patients with functional seizures will have been wrongly diagnosed as epilepsy at some point and may have even taken drugs for epilepsy.

What are the typical features?

The above image represents a functional seizures. It is from a 19th century book describing them

There are two main types of functional seizures:

Your doctor will be looking for specific and typical features of dissociative attacks that are different to epilepsy. These include:

Making a diagnosis of functional seizures requires the doctor to be expert in the diagnosis of epilepsy, since epilepsy comes in many different forms. The two types of problem can look very similar, even to well trained observers such as paramedics, nurses and hospital physicians

Specialists can diagnose attacks more accurately (in 9 out of 10 cases) if they can see a video of them (such as a video recorded on a mobile phone). They can also often be quite certain about the diagnosis if they’ve seen and examined you during one of your attacks.

Sometimes, if doctors are unsure, they can use an EEG (Electroencephalogram) to look at electrical activity in the brain. It shows an abnormal pattern of electrical activity during epileptic seizures but these patterns are not seen in functional seizures. The EEG is most useful when it is combined with a video recording of one of your seizures. Even here what the doctor should be looking for is a typical appearance of functional seizures and not just a ‘normal EEG’

Brain scans, such MRI or CT scans, are NOT helpful in diagnosing dissociative seizures, but may be done to make sure that the person with functional seizures doesn’t have something else AS WELL.

Why do they happen?

Dissociative attacks are a complex problem. They arise for different reasons in different people. Often the symptoms are accompanied by feelings of frustration, worry and low mood but these are not the cause of the problem.

We recognise a number of different situations in which functional seizure can arise. Your symptom may fall in to one of these categories although often none of these appear relevant:

Patients with functional seizures often have a brief warning least 50% of the time. Some have no warning. Others have a warning every time. Quite often patients start out with a warning which over time gets shorter and shorter and may disappear.

Learning about this warning phase, learning to prolong it and learning how the blackout may be your body’s response to these horrible warning symptoms can be a key part of learning to overcome functional seizures

What things happen over time to make seizures worse?

It may never be possible to say why someone has functional seizures, but once seizures start, many things can happen to make them worse. For most people, simply worrying about the seizures can actually make them a lot worse.

A kind of “vicious circle” sets in where worry about the seizures means they happen more often, leading to more worry and more seizures.

Examples of things that make people worry about their seizures (and which can, in
turn, make them worse) include:
 fear of being injured during a seizure
 fear of being embarrassed by having a seizure in public
 fear of losing control
 being told different things by different doctors
 feeling that none of the doctors know what’s wrong with you
 fearing that you have a serious underlying illness that hasn’t been picked up
 taking medication that doesn’t help
 having unpleasant side-effects from medication
 fear of not being believed.

There are now some useful links on the web:

There are videos on Youtube of people having functional seizures. I have decided not to embed them as not everyone wants to see someone having a seizure. 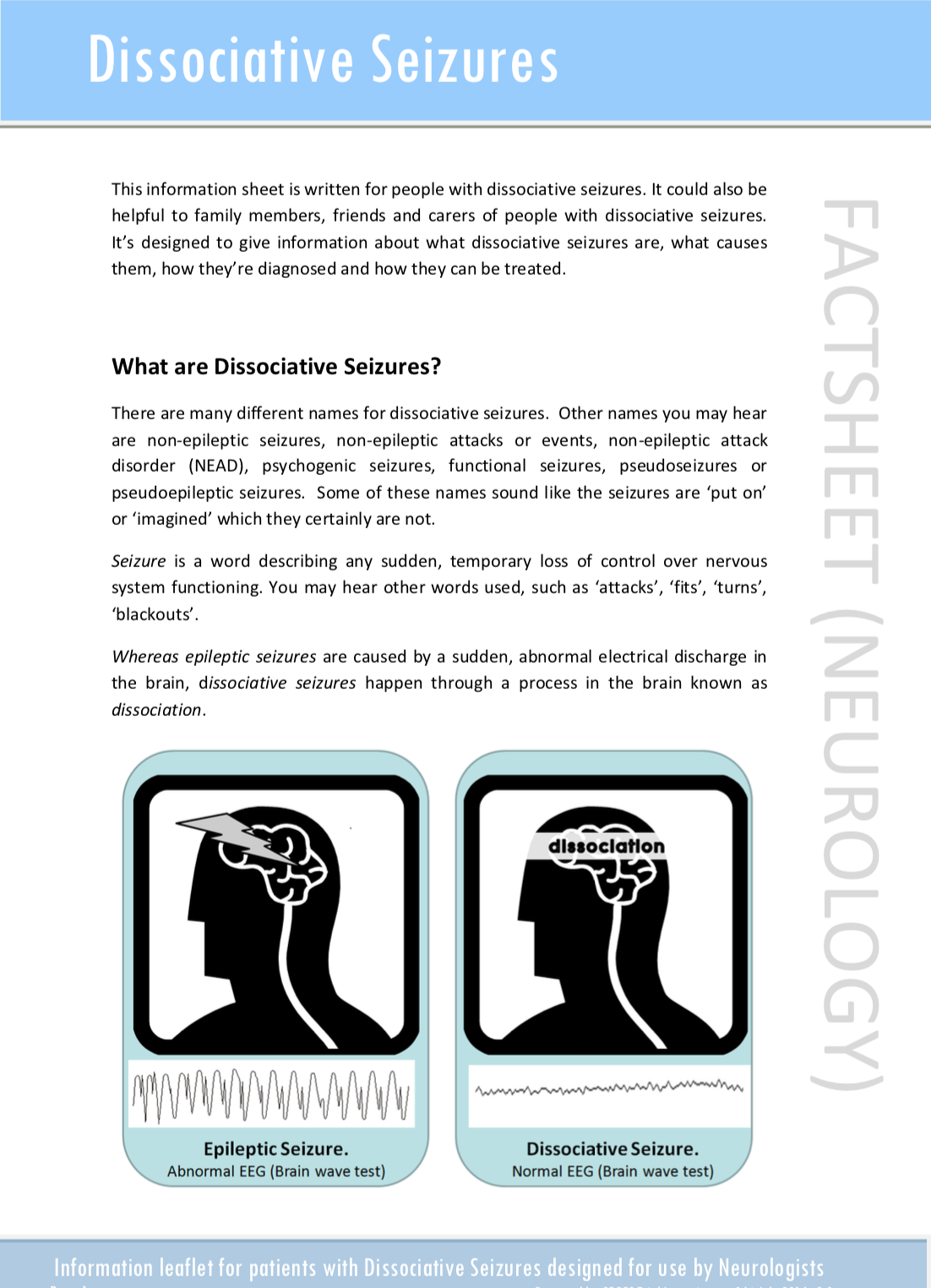